Historical artworks can help to put context around contemporary art. To view a concise yet comprehensive collection of western art from the Renaissance to the turn of last century, make time to visit the Scottish National Gallery, Edinburgh. Displayed here are works by the most celebrated and influential artists of the last 600 years - it is like roaming through an encyclopedia. Rove your eye from masterpiece to masterpiece; Titian, Raphael, Rembrandt, Corot and Matisse sit side by side…this is the foundation contemporary art is built on. The collection is first class, and sits alongside significant and celebrated Scottish talent – and it’s rather exciting how swiftly one can experience and embrace the collection. Highly recommended.

Currently undergoing renovation (2019), I navigate through construction re-routes before tentatively stepping over the threshold of a very dark, heavy, and very large door. I'm greeted by a woman in a small dim lobby, who beckons me… she then simply opens another very large heavy door, to reveal a light filled cavernous circular room, that displays masterpieces within ornate gilt frames.

Circular rooms! Light pours from their domed tops onto finely hatch-textured walls. This gallery is a series of octagonal rooms connected like cells of a beehive. Each honey-comb shaped gallery giving way to the other, their walls a bright crimson, turquoise, taupe and brilliant navy. There are small antechambers off to the side housing other historical paintings and small sculptures.

History of Art Part A

I commence at the period of art ‘rebirth’ at around the mid-1400’s, the early Renaissance. At this time classical literature, philosophy and art, are being ‘rediscovered’ - Christian religious scenes, Roman historical scenes, as well as portraits of prominent community leaders are in vogue. Over the next 300 years artists develop new ways of rendering 3D objects, they loosen up their brush strokes, and use more varied and brilliant colours. There is innovation in the representation of perspective, and in the composition of mediums and materials (the paint and canvas).

Botticelli, Raphael, and Titian feature in this collection, demonstrating the shift from rather flat religious work that dominated the middle ages, to works of sculpted three-dimensional forms that spring from the canvas and use a swath of gentle colour-shifts to authentically convey form - and also feeling. 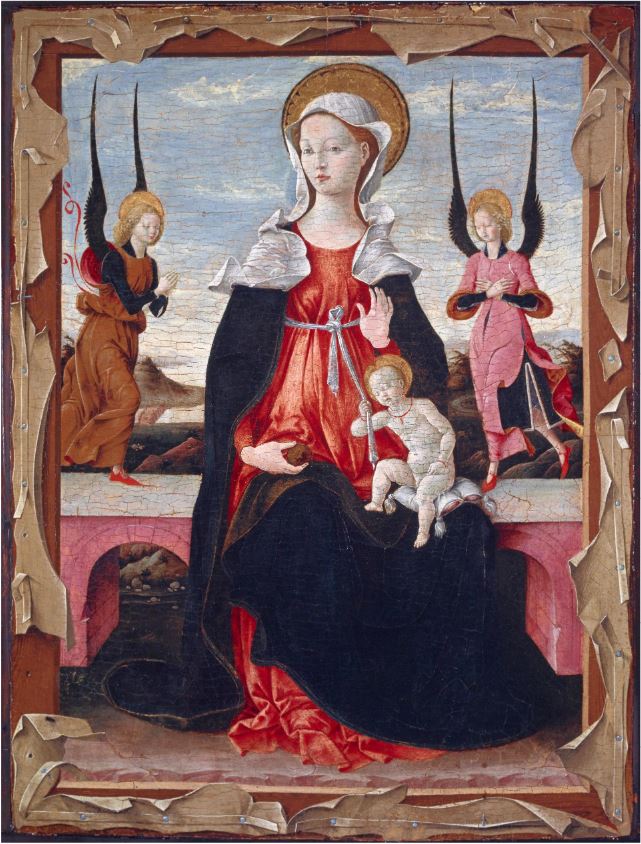 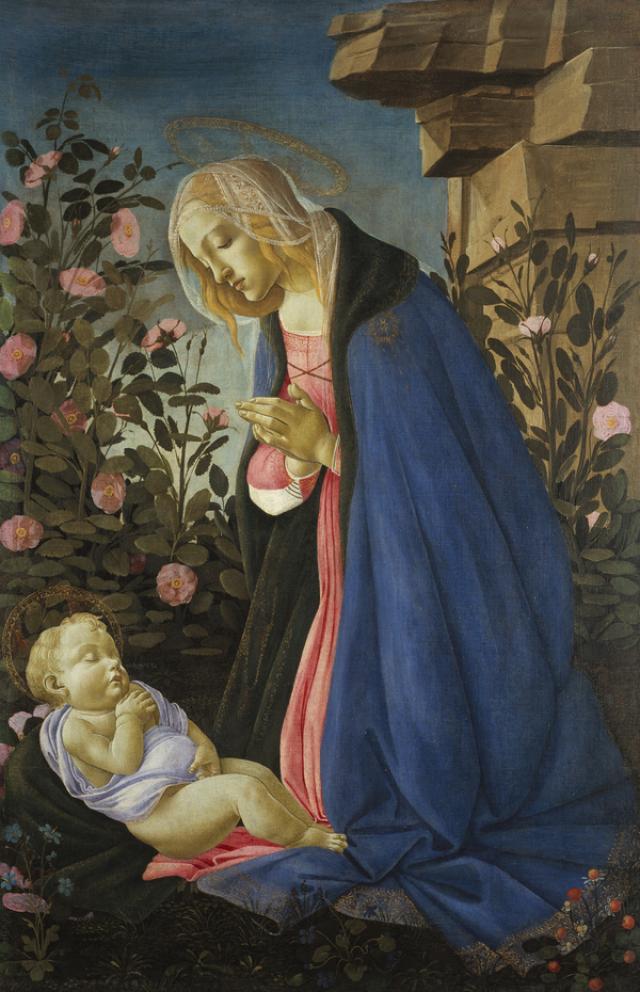 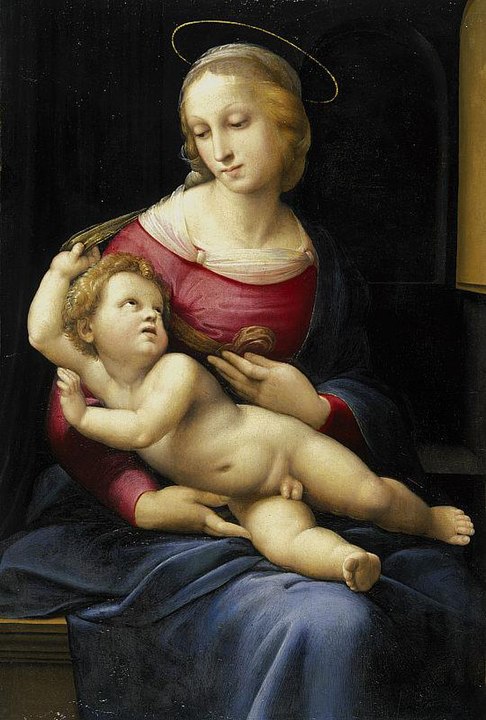 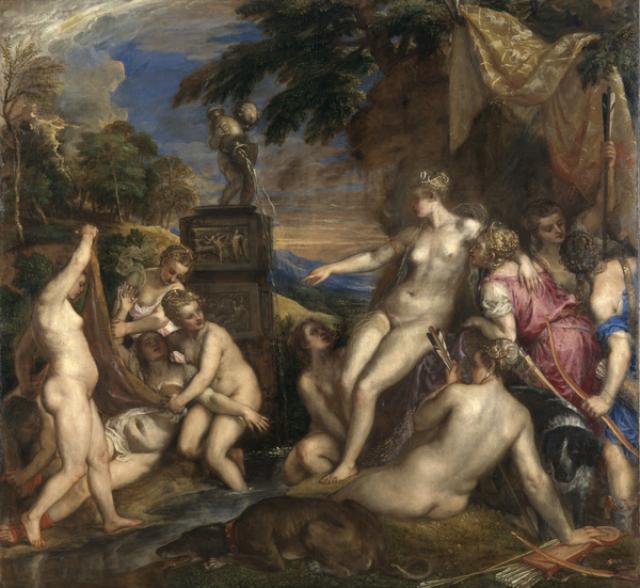 The center of this hotbed of activity was Florence, and soon enough the new knowledge spread along trade routes across Europe, including Amsterdam. The Dutch, having recently suffered an 80-year war to achieve political and religious independence, experienced first-hand the effects of poverty, displacement, and famine. Embracing the Renaissance painting style to capture the influential and wealthy, the protestant artistic community also painted ordinary people, ordinary activities, ordinary objects and landscapes with equal detail and verve. This group of artists depicted the beauty and ugliness in everyday life, and with this developed the idea of genres – landscapes, portraits and still life – and Rembrandt was at the helm.

Rembrandt is among the most celebrated artists of this era. He wasn’t easily categorized by his painting style – he is situated somewhere between the painterly style of Titian and the delicacy of Raphael. He painted over 60 self-portraits over the course of his life (which is unusual as these would not have been commissioned by patrons). The work below is displayed at the Scottish National Gallery and depicts him at around 51 years old – after he lost an unknown number of infants, then his wife to the plague, and just prior to him becoming bankrupt. The mastery and intimacy of this portrait is utterly captivating. 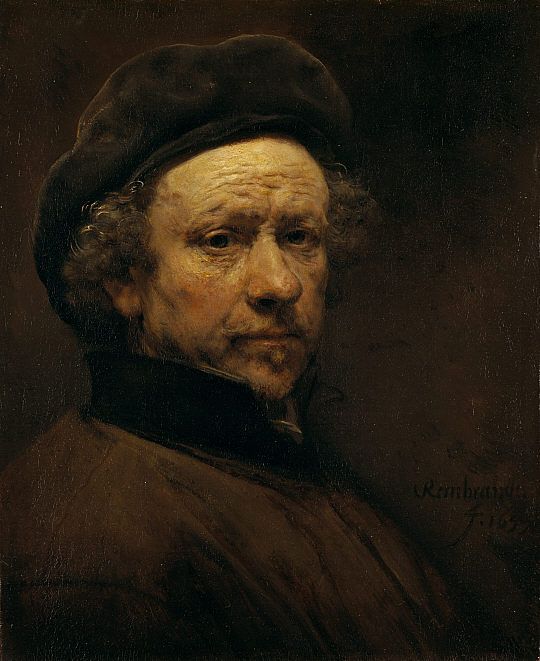 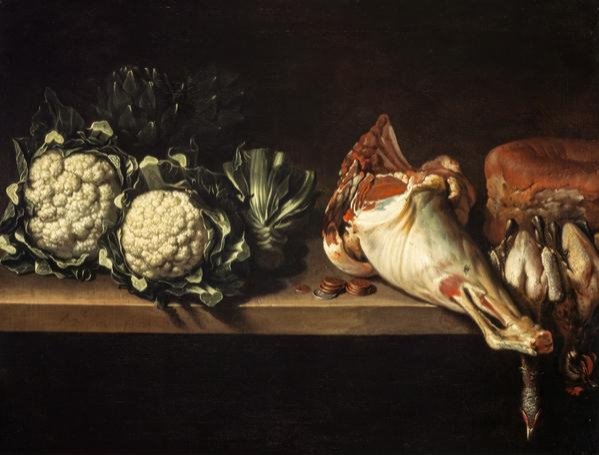 Of all the small rooms and niches in the honeycombed galleries of the Scottish Art Gallery, I experienced such glee turning a narrow corner to come face to face with the ‘The Skating Minister’. This work is far more contemporary than those from the Renaissance, due to the composition, subject matter, and execution of the painting itself.

Tensions are not only realised through the range of brush strokes that depict a tightly composed formal figure moving with ease across a loosely painted, shimmering, deep winter landscape - but through the composition too. The composition reveals an intimate relationship between our natural environment and cultivated refinement, or possibly, the depiction of infinite possibility and determined discipline – cultural measures as relevant then, as they are today.

History of Art Part B

It is has been suggested by some academics that there was no significant innovation within the arts until the mid-1900’s. Italy and Amsterdam had been the hotbed of western cultural activity – however in the mid-1900's the conditions of Paris, France, fostered a culture that would challenge the western world and the notion of ‘art’.

In this section of gallery, the walls are double hung – there are glorious historical paintings of heroic ventures and romantic fairy tales - hung one above the other from floor to the ceiling (or very near it). Each circular light filled gallery opens to the next, and bespoke circular leather couches positioned in the centre of each space reflect the room shape – and probably had visitor upon visitor over the centuries rest on them to consider and ponder their surroundings, refer images below. 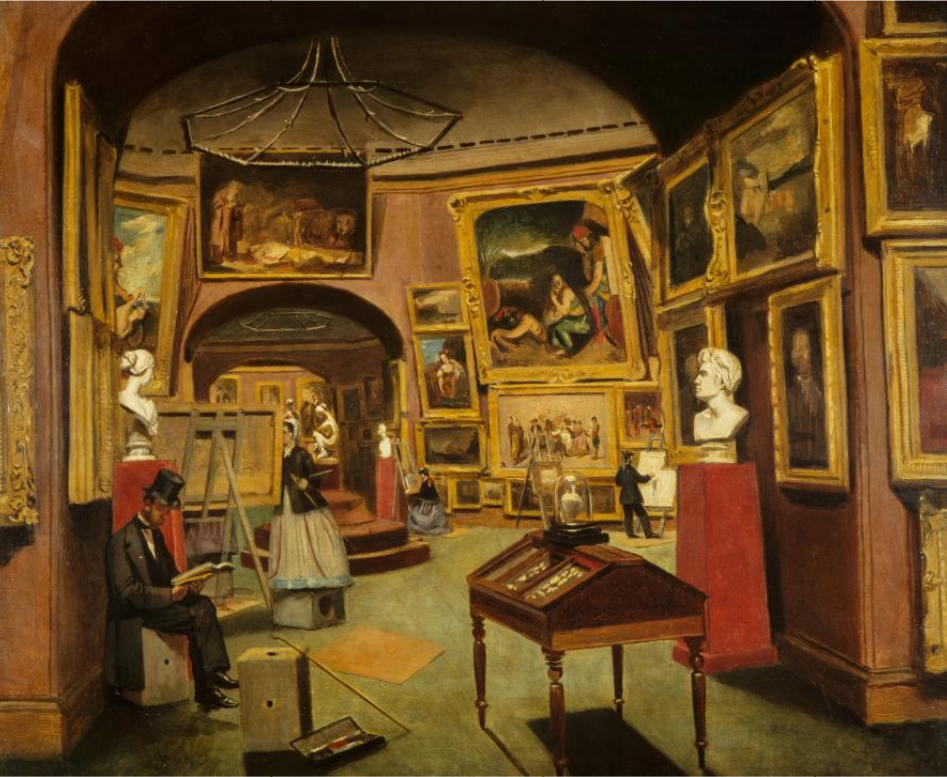 Images courtesy of the Scottish National Gallery and The Art Fund

In the 1830’s highly finished genre paintings without visible paint strokes, typically varnished with a gold pigment, dominated the Salon’s. These still were mostly portraits of wealthy and influential leaders, as well as religious and historical scenes. However, emerging at this time was a movement that edged towards realism in art – that is the Barbizon School (1830-1870).

This School consisted of a group of young men who preferred to find inspiration within the natural landscape (which was not fashionable); to paint using visible and comparatively loose brushstrokes; and to capture the golden glow of the early evening sun light. Their work is characterized by gentle tonal shifts, and a softness of form. The Barbizon School’s core group of artist’s were Rousseau, Millet and Daubigny, and they were all influenced to varying degrees by their predecessor’s Constable and Corot, below. The Barbizon Schools’ interests, values and philosophy squarely laid the foundations for the next generation of young enthusiastic and talented artists – the Impressionists.

The Impressionists raison d’etre to capture light itself on canvas using pure colour, is what fundamentally set them apart from artists in the past – the intention of the artist had shifted. Despite landscapes still being terribly out of fashion in the 1860’s, it was the ability to experience and paint light directly en plein air, in a series of swift strokes, that enabled them to record the essence and feeling of the subject and their environment – whether it be a landscape or everyday people. Their intention was to bring viewers of the work, in their city apartments, as close to nature as possible. The core group of Impressionists from inception was Monet, Manet, Pissaro and Morisot (pictured below), and later Renior, and Degas (below). 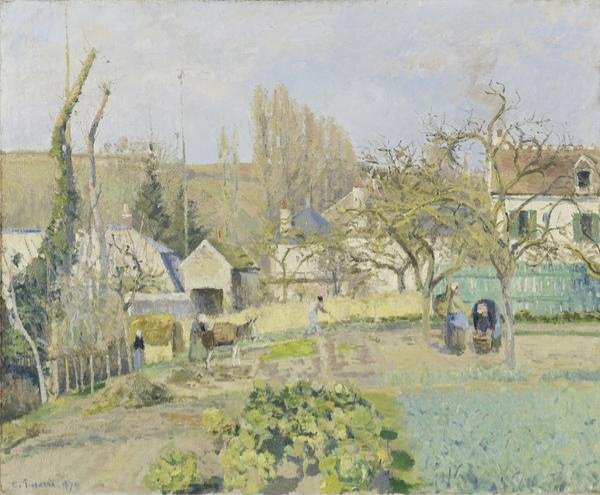 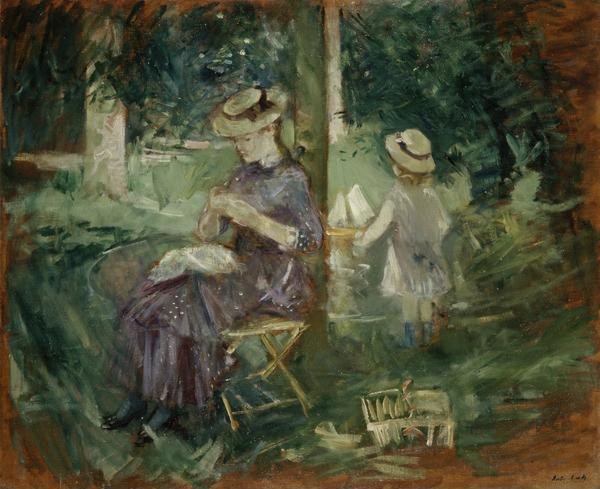 Although experiencing significant impediments from critics and initially the public, the Impressionists continued to exhibit in private galleries, developing a loyal patronage and interest from private collectors and other artistic professions (including music, theatre and sculpture). Eventually the style was universally embraced and artists from across Europe, America, and Australia, made valuable contributions to the movement.

From this point in art history, there is a notable divergence from the main thrust of common investigation - which was Impressionism. Then following artists, in particular, took the principles of the Impressionist movement and pursued their own lines of inquiry as they professionally matured. These lines of inquiry developed in due course into the art movements titled Pointillism, Symbolism and Cubism.

Seurat (below) worked closely with Pissaro (above) to understand the foundation of Impressionism. He then pursued a style of painting methodology that used points of colour en-masse to create lightness and form, which is known as Pointillism.

Although Gauguin commenced his career applying the principles of Impressionism to his work, over time he adapted the way he applied paint. His latter works, although capturing the light, and painting scenes outdoors like the Impressionists, are highly controlled and use block colours and solid shapes to depict the composition. His work reflected themes that were common across cultures, and he sought to resolve meaning and find clarity in the world through his work. This style of art evolved into what is now known as Symbolism.

Cezanne on the other hand, although also starting out with the Impressionists, over time became interested in the 3-dimensional quality of things and how this could be portrayed on canvas. He is often referred to as the grandfather of modern art, and the work he developed over his lifetime formed the foundations of Cubism. You can see in this example displayed in the Collection, Cezanne is outdoors, capturing light, and using swift movements to do so - however the way he is blocking in colours and finding the negative shapes within the branches suggests where his interests were headed. 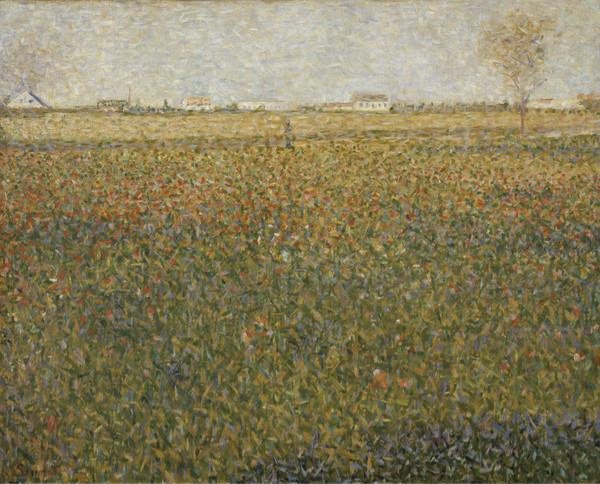 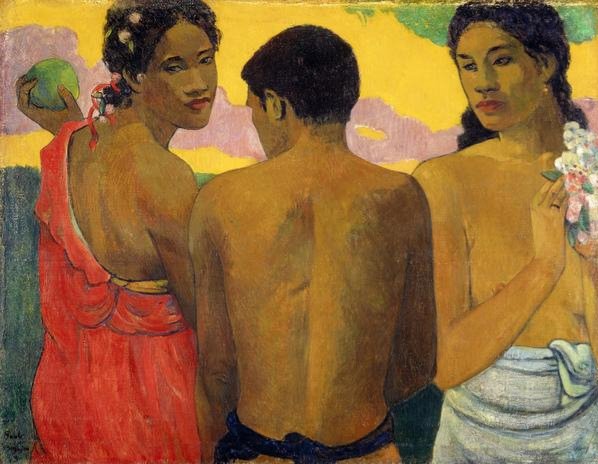 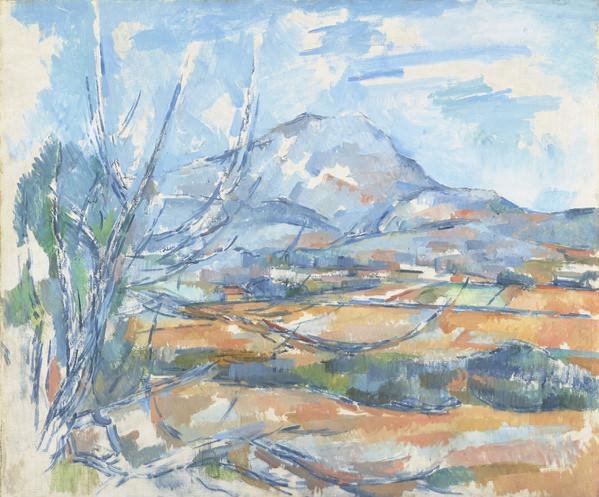 However we are tending into the realm of early post impressionism now…and that is where the exhibition I experienced ceases. This is a truly marvelous collection that succinctly portrays the world’s best artists alongside significant and celebrated Scottish talent – from the beginnings of western art, to the beginnings of the Modernist era.

If not come to witness a brief history of western art, or of Scottish art, come for the glorious architecture and gallery itself. Circular rooms! What a treat. When in Edinburgh next I cannot recommend you call past more highly.

Hilary Jackman | A year on the line

ALPHA60 and the Pigeon